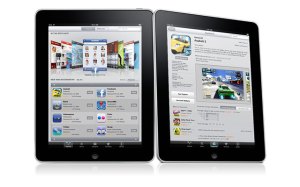 (This isn’t really a review, if you are after that you can find a good one here – including what the iPad looks like inside here!)

So, I’ve had three days to play with the gorgeous toy now. Its really an amazing thing!

Apple seem to have cornered the market in creating svelte gadgets that ooze quality and ease of use. True it doesn’t have the operater freedom that a windows based device may have – you can’t save files in folders (easily), you can’t look through the file system and feel that you have control over the software – its the way Apple works. But do you really need that / or want that? And if you do…just wait for the jailbreakers to work on the iPad.

The weaknesses include the much touted lack of multi-tasking and no Adobe Flash support. The latter is a real shame. It means that the browsing experience, which is otherwise awesome, gets spoilt by the occasional absence of bits in websites. Steve Jobs seems to be determined to push Adobe out of the market and users have gotten caught up in this row between two giants in the industry. Seems a bit childish to me, though Apple cites the processor intensive resources that Flash requires. Other weaknesses: its pricey for the raw processing power, though if you add in the design and brand, then…

It could have moved away from the iPhone layout and interface concept, which were really designed for a small hand-held device. My biggest beefs are that a camera and a USB port, or even a card slot, would have given it a ‘next level’ appeal. A card slot would allow for handling file attachments and easier work on documents you have elsewhere, for example. But perhaps these are things that will be dealt with in version 2 (£££!)? And maybe they would have meant a much thicker, heavier device?

Its not as though Apple has needed the extra appeal, though. The first month in the US saw a million units sold, and its set to do really well here in the UK. Which reminds me of another gripe I have: why does Europe get treated like a backwater when it comes to gadget launches? I can imagine a delay of 2-3 days, but nearly 2 months?! And of course theres the significant cost difference between the US and UK too. Other minor gripes include the smudging on the screen and the amount of dust it seems to attract; the Apple designed case, doesn’t live up to Apple standards. The 3G tariffs are way too expensive too.

With the grumbles out of the way, it has to be said this is a superb device. The bookstore aside, the vibrant screen has revived my old interest in comics! And theres lots of stuff out there you can download. Its easy to use and the battery life is great – two days of heavy usage now, without a recharge.

It may not create a paradigm shift in computing, as say the laptop or smartphone did. It may not make a major dent in the business/corporate usage of computers. But what it will do is to hugely impact on the way people use computers socially. You can sink into your sofa and very comfortably play around with an all-in-one device that allows you to check emails, update your facebook status, tweet and browse, and have a slick experience while you do it.

Imagine you have a few minutes between the News and your favourite programme and you want to quickly check you Facebook page to see what friends are up to…who wants to switch on a laptop and wait while an OS loads up? You are on a train after a long day, you can now watch a rented movie, or ripped DVD, in a nice, clear, hi-res screen without squinting at a mobile screen, or carrying your laptop around all day. You can flick through pages of books, read magazines, play games, etc. All in a device that feels rightly weighted and comfortable in your hands; while you sit, slouch or lie-down. You can browse to a location, or pull out a slide-show, then pass the device around to friends in the room, or to colleagues in a meeting, in a very different way to how we use laptops today. Its all about the experience. As Stephen Fry said as he bought his UK 3G version, “…it actually makes the things we do seem more fun, because we are human beings, we respond emotionally to things not functionally…”

That’s what Apple seems to understand well. We are likely to see stiff competition on the next few months. Will Apple do to the tablet market, what it did to the smartphone market? The early signs are promising for Apple, the App store already has over 5,000 dedicated iPad apps, many of which make great use of the 9.7 inch hi-res screen; and of course iPhone apps are mostly compatible as well.

I’m always amazed at the success of Apple, it can’t be down to just using good tech and fancy designers – any other decent company could easily copy that. There’s a philosophy behind the business that runs much deeper. True, people have mixed feelings about Jobs’ obsessive control over the business, but as long as he pumps out this sort of stuff…I’m not complaining.

One thought on “iPad – the First 3 Days”